When using MacOSX and Docker you currently need Docker Machine. A problem that you’ll run into very soon is port forwarding. For example when starting tomcat:

This expose tomcat on port 8888 on the host and maps it to port 8080 in the container. So you should be able to just navigate to “http://localhost:8888” in the browser but on Mac you’ll end up with this instead: 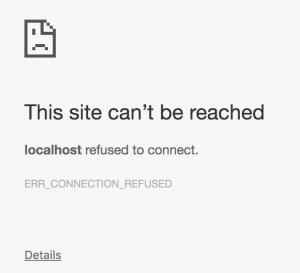 Since docker is running in VirtualBox on Mac we need to forward a port to the docker-machine VM as well. There are many different ways to do this but I think they are all a bit cumbersome to remember. For this reason I created a small bash script to make it easier to remember how to do port forwarding.

The name of this bash script is `pf` (which stands for port forward). It allows you to create a port mapping as easily as this (after you’ve started the docker container):

This forwards port 8080 in the container to port 8080 on the host in the docker-machine environment name `default` by opening an SSH connection to VirtualBox in the background.

If you run into this error:

you’ll need to specify the name of your docker-machine environment. For example:

This will use the `dev` docker-machine environment.

But what if you want to use a different port on the host? Just do:

If you’ve started port forwarding in the background (default) you can easily stop it using:

but `8888` would be enough. Note that there’s also no need to specify the environment when stopping the port forwarding (using `-e`).

There may be cases where you’d rather want to run the “port forwarding process” in the foreground. This is also very easy, just add `-f`:

If you do this you’ll see the docker-machine console and once it’s shutdown the port forwarding is also stopped automatically (i.e. no need to run `pf 8080 -s`).

This script makes it easy to remember how to do port forwarding with docker-machine on Mac. There are more options available in the script and if you want to know more just run:

Note that if you need more advanced options just use the vanilla `docker-machine` command. The purpose of `pf` is to make it really easy to do the most basic things. Don’t forget to visit the github page if you find this useful.